The decision to leave the life we had only just started to carve out in Estevan to move to Regina was not as easy as some may think. We discussed at length what would be best for our family, what would make us happiest in the future. I really wanted to be closer to my family and friends in Moose Jaw (even more so after having a baby!). Having both lived in much larger cities, we wished for the things a bigger centre had to offer. But we both had good jobs and coworkers and friends. We’d only bought our house less than a year before, but we’d quickly made it our home; it was the first house either one of us had ever owned and it was where we brought Lily Rose home to after the hospital. I felt most attached to her nursery, not just because it was my baby girl’s gorgeous little space but because so much time and love had been put into decorating it (more on that in the next post!). I broke down once before we left, and cried in the bath (not sure if it’s a new mom thing, a female thing or just a Bree thing, but I seem to do a bit of crying in the bath…sometimes with a glass of wine to console me;). I was sad that my baby was leaving her beautiful room, and cozy home. And I was feeling overwhelmed by the days and weeks of packing and unpacking that lay ahead.

We chose to make the big move knowing it would be a lot of work and added worry in an already hectic time in our lives, but the pros ultimately outweighed the cons. Jon would be starting an exciting new position in Regina. I’d need to find a new job once my maternity leave was up in the Fall, but I could continue my Master’s at the U of R then too. Finding renters for our house gave me worry, nonetheless renting something newer and bigger was exciting. Jon’s family was all still in Estevan, yet like a lot of things that seemed to quickly work out for the best with this change (including quickly finding renters and securing the new townhouse that was our top pick when we went looking), they too decided to make the move to Regina. On top of preparing for a move, we needed to be ready for two weeks’ away while Jon trained for his new job. Of course this too came with a bright side:  escaping the harshness of Saskatchewan winter in beautiful BC, catching up with friends and seeing the sights in Vancouver!

More than a month before we actually moved, we started the organizing and packing process. We spent nights and weekends sorting; the good thing about moving is it forces you to rid yourself of crap! The major purging took place once Jon had two weeks off at the end of January. Without him being off to help pack, and to do the majority of the work needed to prep our place to be rented out, I couldn’t have done it. Moving always sucks. No matter how excited you are to get into a new house, live in a new city, moving is always a dreaded task. But moving with a 4 to 5 month old is a whole other ordeal. It’s a practice in organization, and a major test of teamwork on the parents’ parts. Every two hours our hungry girl needed nursing, then Jon and I took turns playing with her before starting the often futile process of readying her for a nap (thank god for the swing and bouncy chair that definitely helped entertain and care for her for short stretches!).

Then one week into Mission:  Move House, LR got a cold, bad cough and needed to be put on a nebulizer. It was the first time she’d needed to see a doctor, and if that wasn’t a hard enough experience for stressed new parents, I got sick too. After being useless for a few days, I soldiered up and resumed the cycle of nursing, playing, and attempting to get her to nap, at which point we each attempted to cram in as much sorting, packing, and cleaning as possible.  Whenever I felt overwhelmed by all that was still left to do, instead of crying over a glass of wine in the bath, I reminded myself of the packing and cleaning-free two weeks awaiting us in a hotel suite in Langley. We took quick breaks to eat, see Jon’s family, and a few friends, but we didn’t get to say goodbye to as many people as we would have liked, because suddenly it was the end of January and we had to book it to BC.

After two weeks enjoying much milder winter weather (with both of us asking why the hell we weren’t moving to BC!??), we were greeted by a snowstorm upon our return to Saskatchewan. But besides that, settling in to our new place was fairly easy at first. Yes we were sleeping on an air bed, which wasn’t cool, but we were also not dealing with a barrage of boxes yet, since the big move wasn’t happening until the next weekend. Then moving day arrived, with it freezing temperatures, and suddenly my rosy view of moving was clouded by a sea of plastic totes. 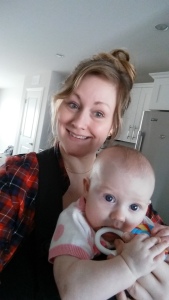 The stress of moving was back, along with a major dose of mommy guilt. I’d felt it when we organized and packed up our house:  there never seemed enough hours in the day to spend with little Lily and get done what we needed to. And then again in a different way in Langley:  we were in a hotel suite with ample time but missed many of the comforts of home that made Lily a little happier and me a little saner (did I mention she started teething while away!?). I know babies appreciate routine, and while my attempts to start one with LR weren’t proving successful in the areas of feeding and nap times, I at least wanted to provide her consistency in the location where those feedings and naps happened. But with moving, traveling, nights spent staying with family then two weeks away smack dad in the middle, I felt her life was far from consistent or calm.

I found reassurance in what my friend Janine told me:  she had traveled and moved countries, not just cities, with a small baby. When she stressed about not giving her baby boy the consistency his little life required, a seasoned traveling mommy friend of hers told her that as long as the parents are what is consistent, it doesn’t matter that everything else around baby changes. I had stressed myself silly thinking I had wreaked havoc on my little one by choosing to move houses and cities and traveling in between. But through it all, we remained the constants in her busy life. At the start of the unpacking process, I thought I needed to get things put away as quickly as possible, to furnish spaces and decorate as much as possible, so that our new house more closely resembled the cozy home we’d left. But I’ve chilled on this front, and realized that it takes time to settle in, and a house doesn’t become a home overnight. And for a baby, it isn’t the physical structure, appearance or location that matter anyway. They aren’t concerned with moving, they don’t care yet that they have a new room, or notice how long it takes for pictures to be hung or for their nursery to be decorated (it takes most infants ages to even realize the baby they see in the mirror is their own reflection, ha ha!). All that really matters are the people inside the house, the people who care for them. For Lily Rose, that’s us, her mom and dad. For now, she just needs us; we are her home.

Home is wherever we are together<3